PHOTO TOUR: FOR CREATIVE AND STRONG-MINDED 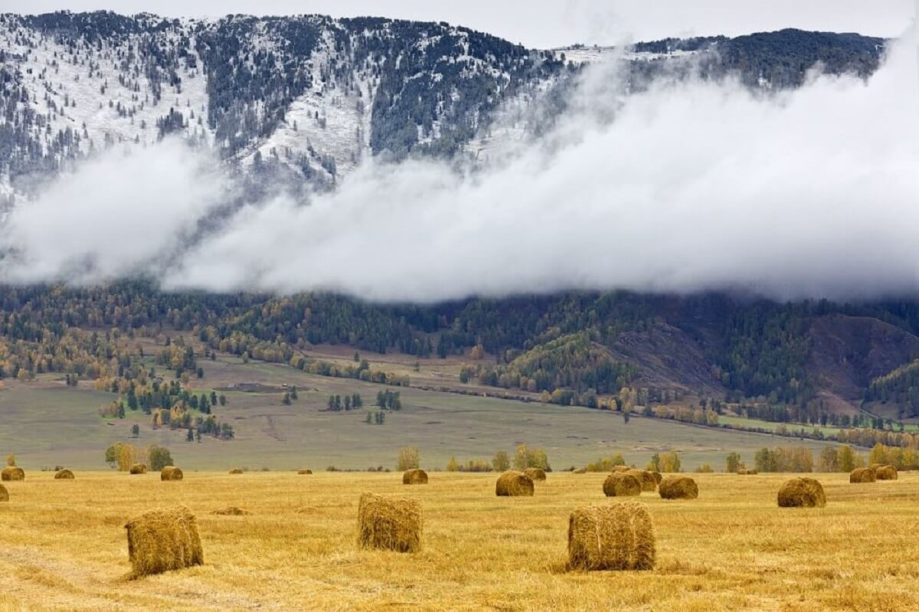 This trekking for those who love wildlife, wants to test themselves in the mountains and understand who he is”really”. This route is for the strong in spirit. And if you are weak, they, the mountains, will make you stronger.

And of course the route for fans of hunting for the best photo. An experienced guide and photo guru of our team will show you the most amazing unspoilt corners of the Golden Altai. You can take photos fr om a height wh ere only birds fly and run down from the mountains of the river. You will shoot sunrises and sunsets, a riot of contrasts of snow and Golden grass, ice, harsh rocks and yellow-red valleys. And of course we will devote a lot of time to night photography.

Meeting in Novosibirsk, 08: 00, transfer service 818 km to the village Tungur, overnight at the camp site. 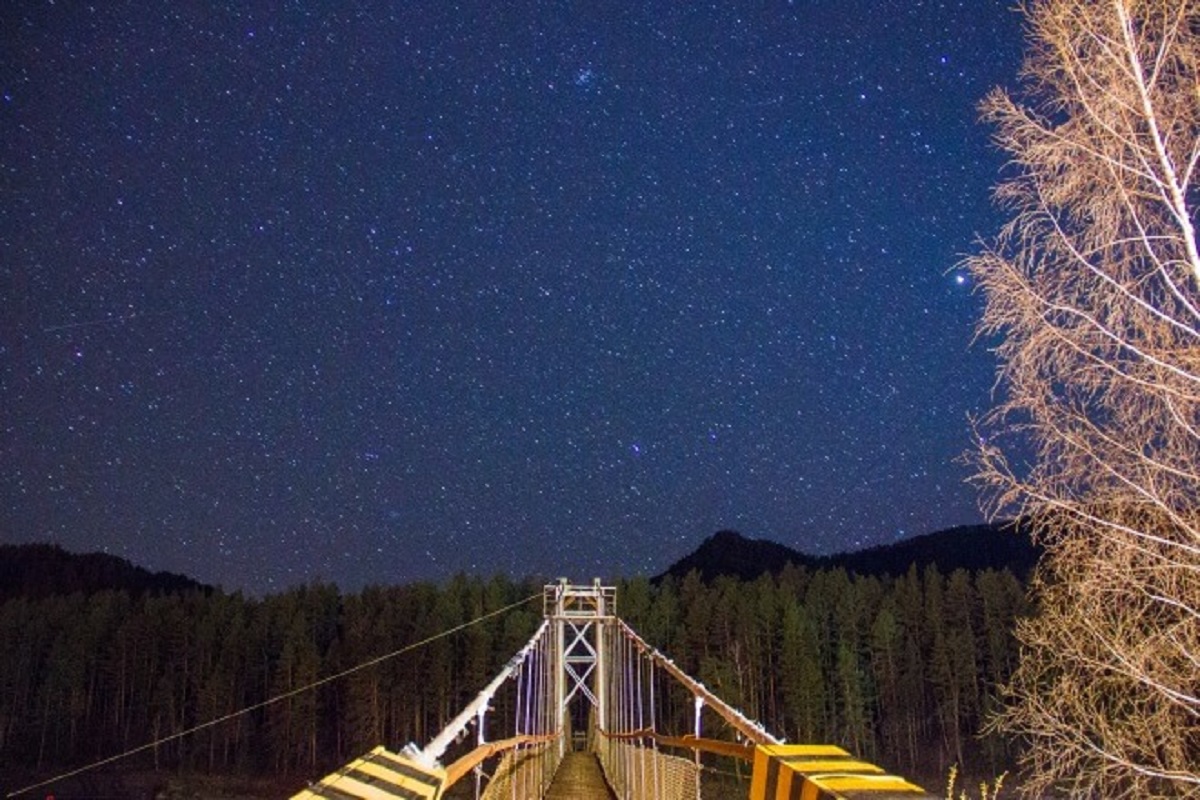 on the first day we will cross the tributaries Kucherla-black river and Kuylu. Kuylu tract is famous for rock paintings of ancient man. The landscape of this area is complemented by old wintering shepherds. Here you can take good photos! The drawings were only discovered 50 years ago. At a height of about 3 m above the grotto is the image of the Maralikha-the image of the mother-progenitor, who looks in the direction of Katun. Above the head of the Maralikha in the form of a twig, a schematic image of the Tree of Life is embossed, which is like a continuation of its tree-like horn. According to the Altai shamans, the Tree of life serves to connect the Celestial, terrestrial and underground zones of the Universe. It is known that mount Kuilu is the ancestral mountain. The distance is 14 km. 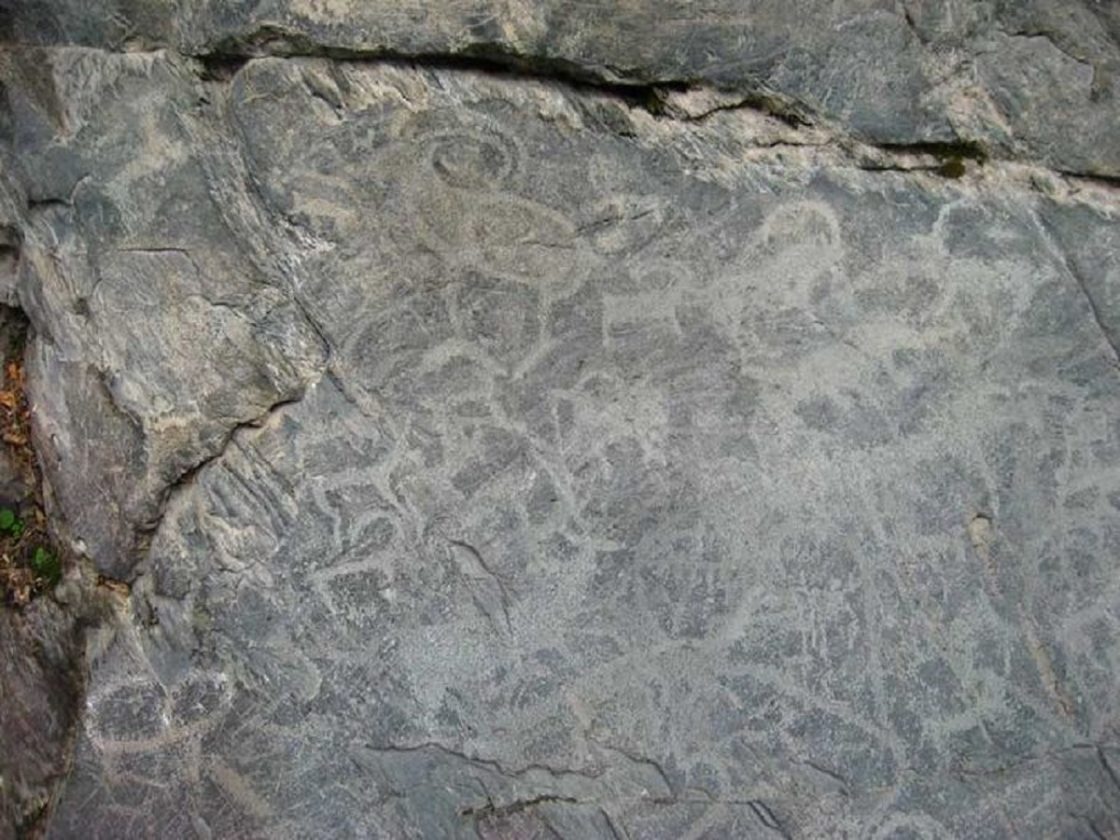 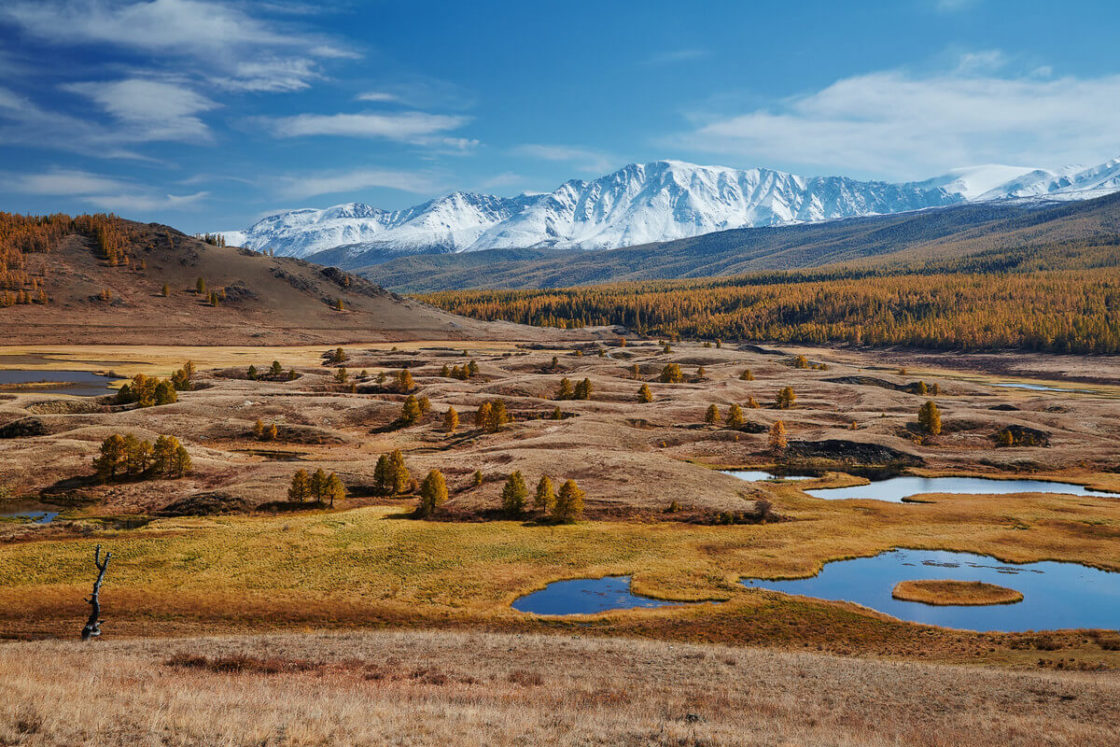 Today we will pass the Parking Tegeek (“hook”) overlooking the waterfall Tegeek, the height of the lower cascade is about 40 m. from the waterfall begins the protected area of the Katun reserve. Further it is necessary to cross one more moraine shaft from which the lake kucherlinskoye opens. Once in these places lay an ancient glacier, which retreated in its time and in its place formed a lake of amazing beauty (from the Altai Kajur-ly or Kudyurlu, that is, from Solonets). The distance is 18 km. 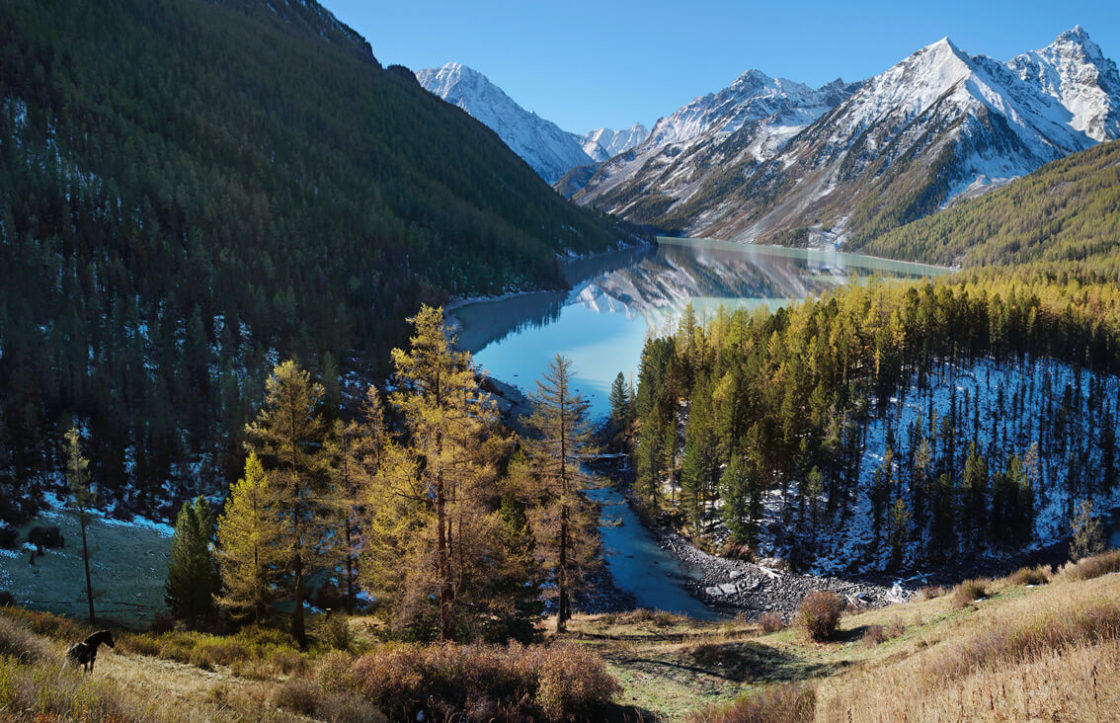 According to Altai legends, the lake is inhabited by” Kol-Ezi ” – the owner of the lake. Altaians believe that this spirit can scream like a bull. That’s it! There is no way to check!

Maybe we’ll get lucky and have a photo hunt. According to foresters, in the deciduous cedar forests surrounding the lake, live maral, lynx, sable. On the mountain slopes there are colonies of marmots and mountain goats. In the lake and river grayling (Charan). And in 1997, rainbow trout were launched into the lake.

Between them are flat Islands. Many are covered with unusual grass-down. Its white heads resemble small lumps of cotton wool. Previously, when the locals used flint, the wick was twisted out of this fluff. In autumn crossing Kucherla on horseback will take only a few minutes.

Lunch under the waterfall Ildo-Ira, hanging valley. Begins our a serious approach. It’s time to test yourself. Darashkol lake is 3 km away, the trail climbs serpentine over mossy rocks and a wild trail. The dense forest seems to envelop and warm. We are already walking among the age-old cedars, many of which have been uprooted by the storm. And further the path tries to get lost in dense willow thickets. And there is so much moss that you want to lie down and fall asleep on this “down” feather bed. And here begins the most amazing-these waterfalls, which are a continuous stream for 2.5 km. you will not see anywhere in Altai. This landscape resembles realistic paintings of the Wild West, painted by the wonderful Mexican artist Alfredo Rodriguez.

It is said that it was through this valley that the trail leading to the upper reaches of the Katun to the hot Rakhmanov springs passed. The word Ildo translates as “path, path”, and means “fork”.- That’s right, because this fork will lead us to the most mysterious reserved untouched Altai!

From the hanging valley of the nemytsya stream, a deep bowl-lake Darashkol (“beautiful lake”) – is visible sandwiched between the rocks. Most of the photos were taken from this observation deck – the “captain’s bridge” of these places. In the East is visible the snow-capped Altai crown, and her Belchinski array. Amazing! This white beauty can be seen even from the dense taiga. The surrounding mountains are like an amphitheater.

In these parts we hear a loud rolling whistle. No, it’s not the evil spirit of the lake! Just a bird with a cute name “lentil” and no less cute red color in a white dot. The distance is 12 km. 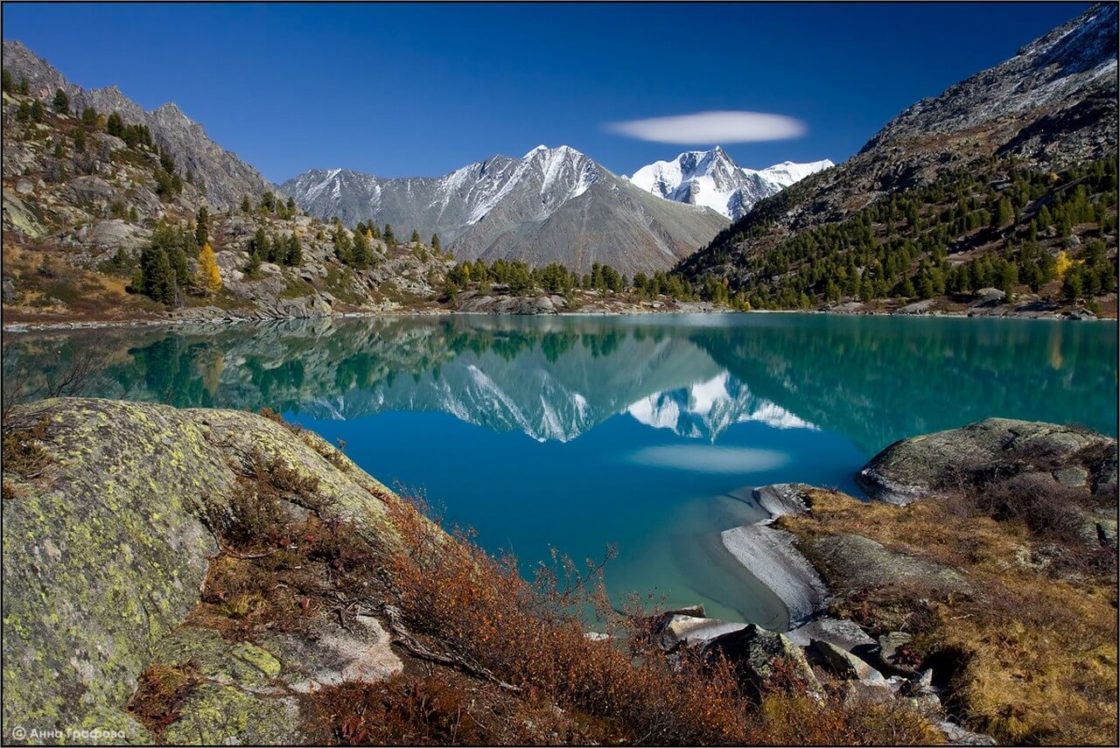 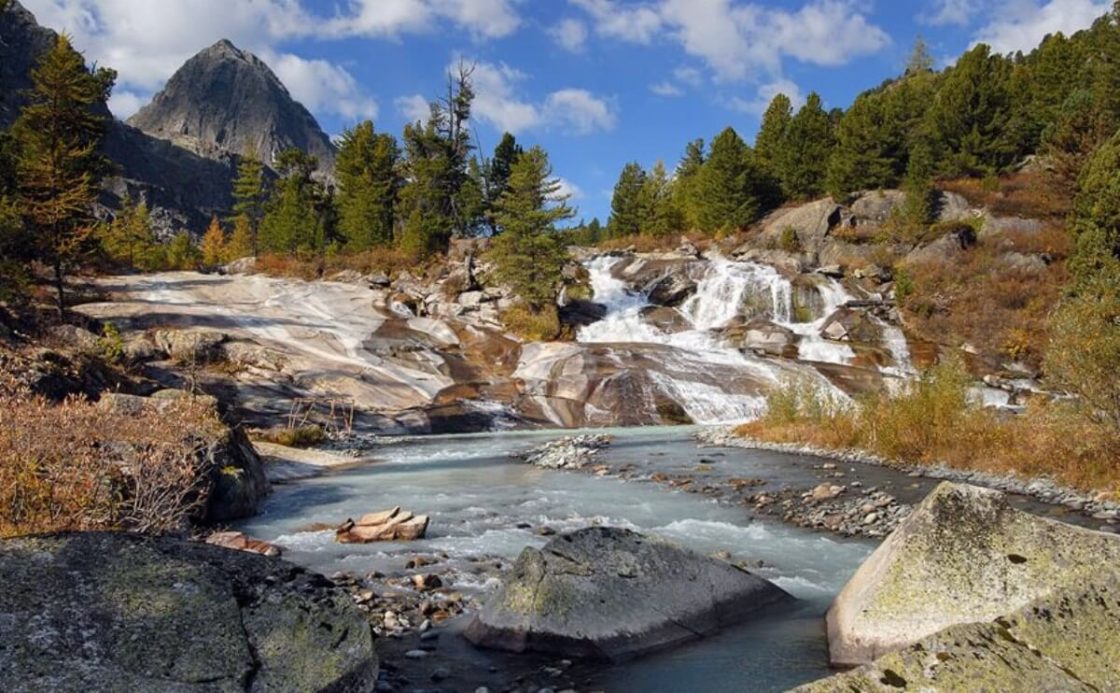 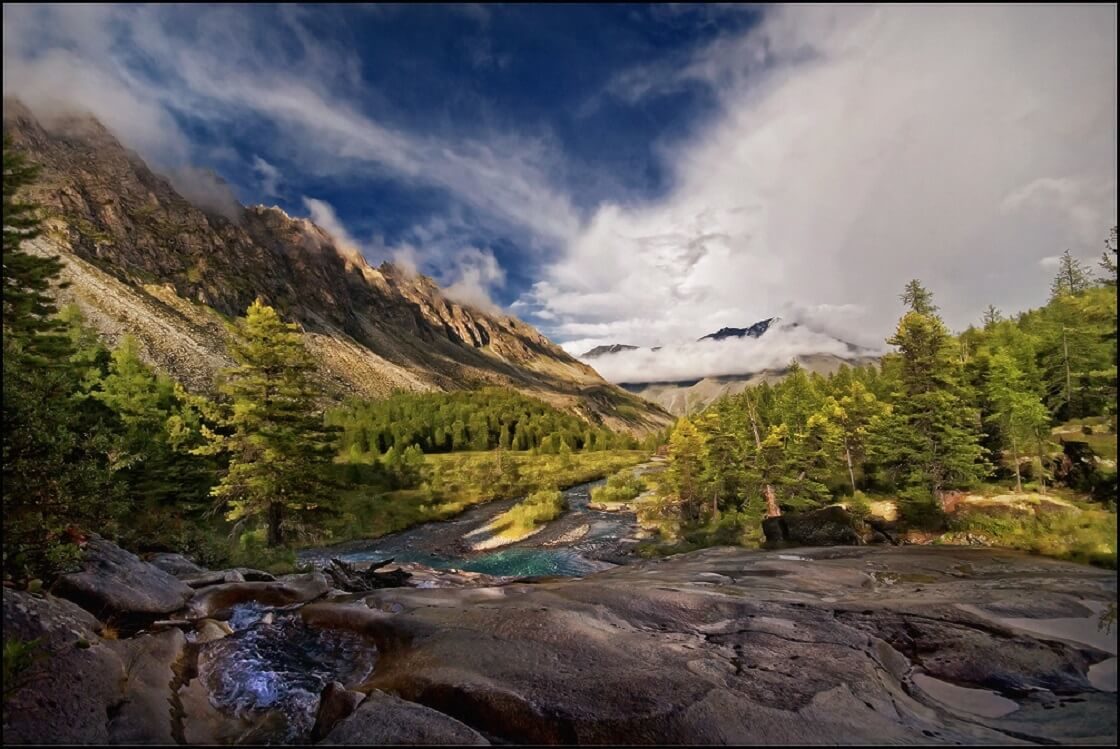 When snow falls in September in these parts, the vegetation takes on a completely different color. Red of the dwarf birch Bush on the white snow! Our way lies along the Ioldo river along a path to a cascade of waterfalls that do not stop here even in September. One and a half kilometers above the lake, the stream flows down with a powerful waterfall from the “sheep’s foreheads”. From the sources of the waterfall, the stream leads to a snow glacier. Ioldo Aira pass (1A, 2840) is viewed. Directly behind him, a kilometer away, lies The yolda pass. A warm wind brings butterflies here, to the pass, which the Altaians call Konak. Sometimes you can catch such a frame.

Now down the snow-covered field to the headwaters of Ildo Creek. To the left of the pass are jagged rocks, from which descends a small glacier, cut Berg-crack at the beginning of the valley ildo night. We walked 9 km.

At the beginning of the trip there is a feeling that you are in a dense taiga-we go along the coast on rocks and animal trails. Having tried here the purest “reserved” water from wild Ioldo, rich in all possible useful mineral elements, you will want to take it with you and even take it to the city. Do not regret it-it is a pleasure that you want to stretch for months.

Before dinner we went to the roaring waterfalls, at the mouth of which fell a wild multi-meter cascade. There is a cordon of Rangers, by the way, with a wonderful bath. Why wonderful? – And about it on the route. 14 km behind, and ahead of the whole berry two days-fields of cranberries, blueberries, mushrooms. We are waiting for a chic compote. 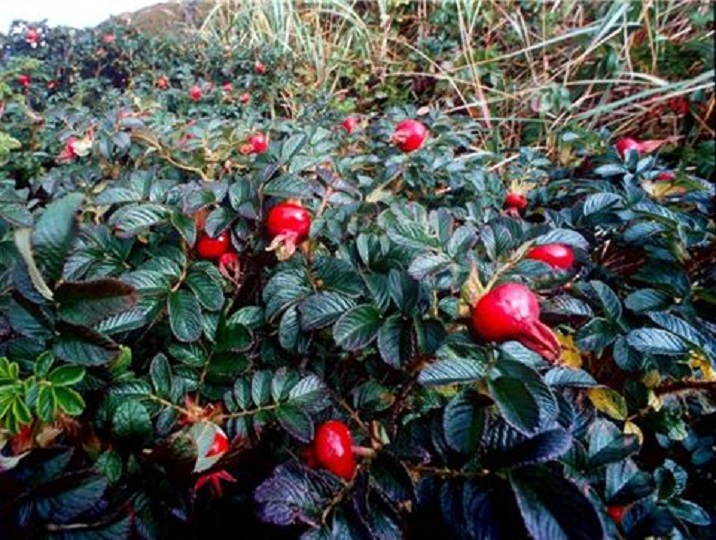 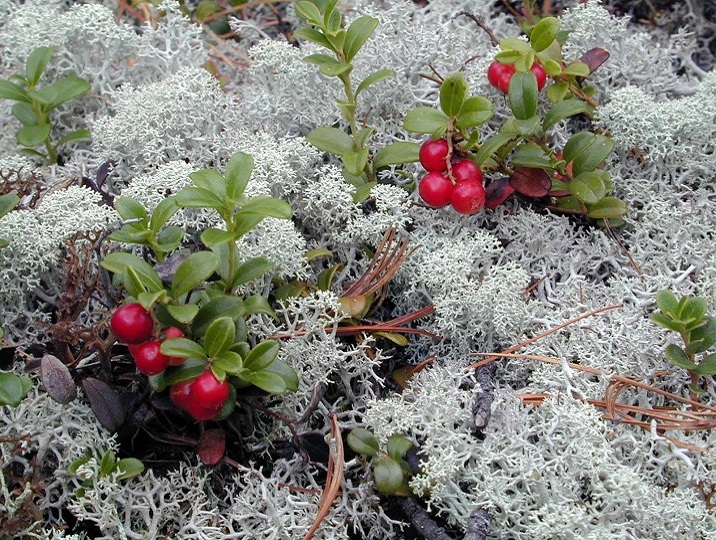 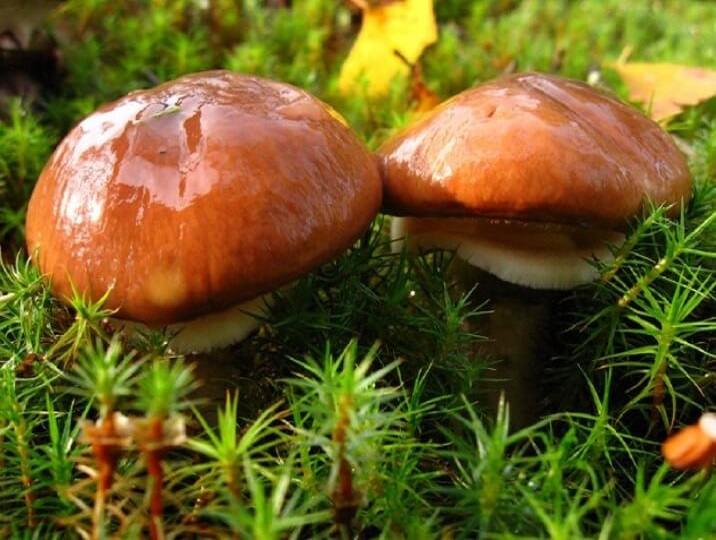 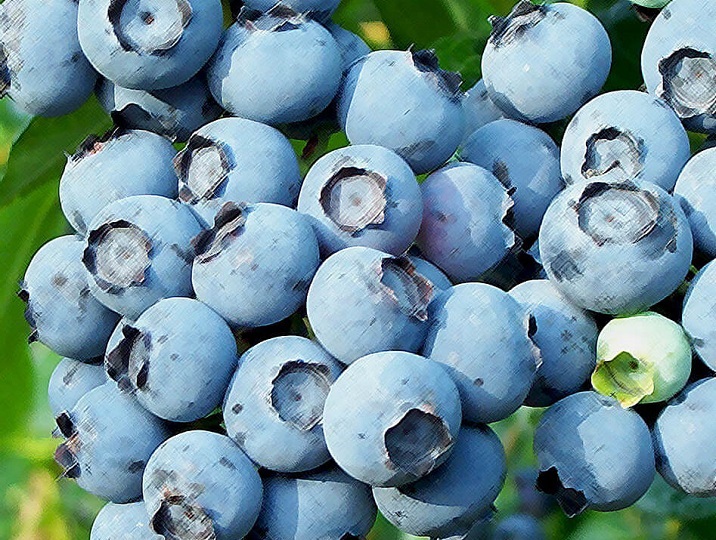 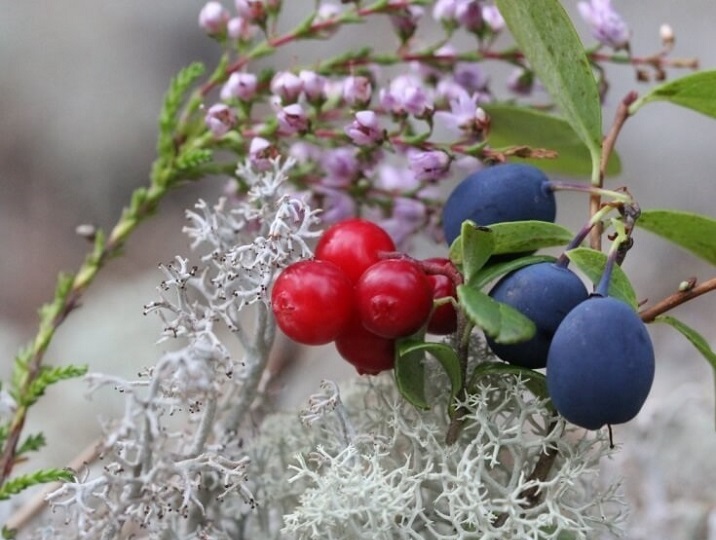 A day of rest at the cordon. Landscape and portrait photography. 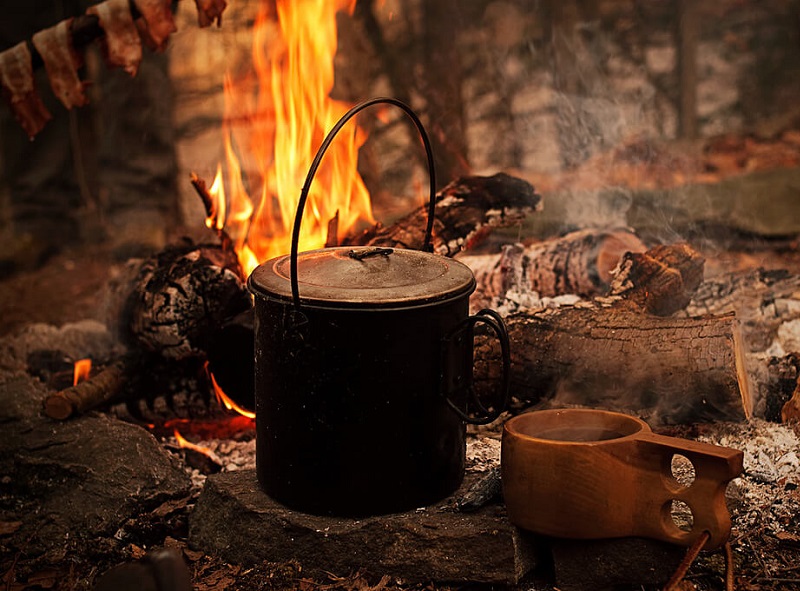 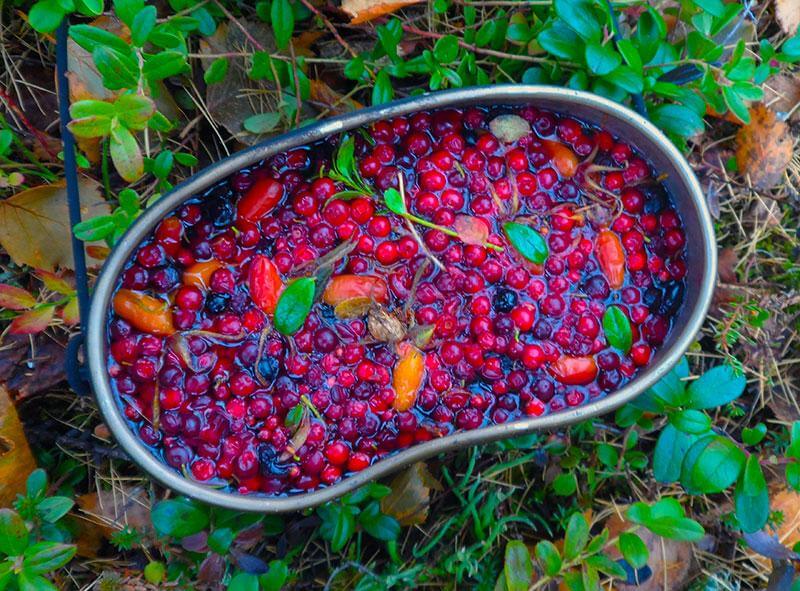 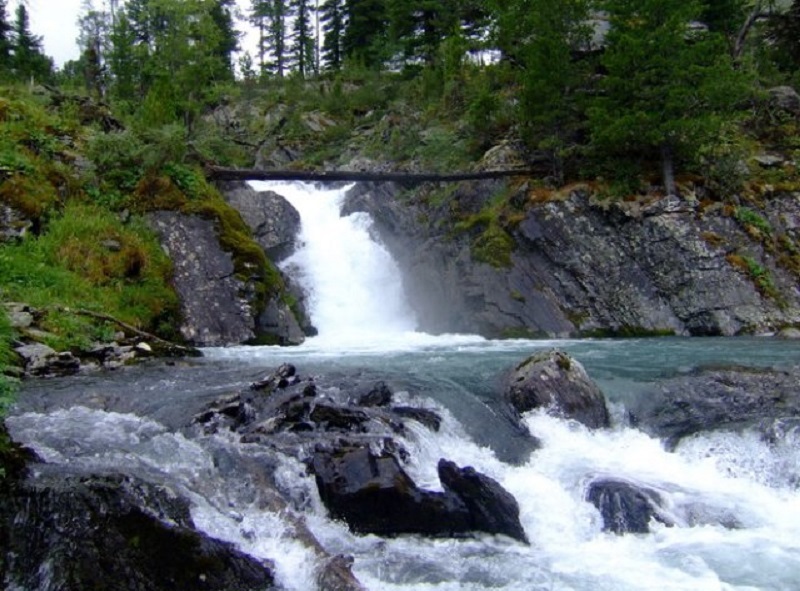 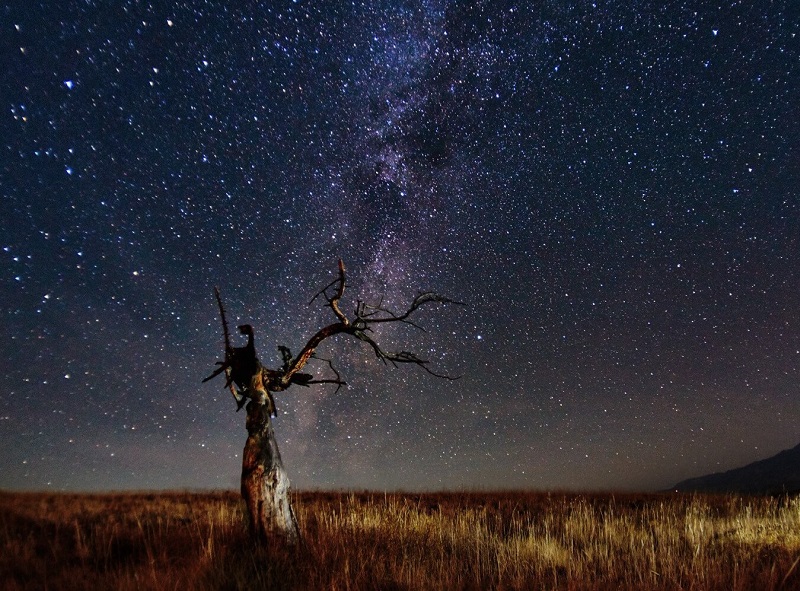 We go down the picturesque protected valley of the Kuragan river to the mistress of Katuni.

Day 10. Visit the Roerich Museum and the Museum of old believers

Today we will see the interior of the traditional house of old believers.

Interesting materials about the local craftswoman-mistress Agashevna, a self-taught artist who painted houses, furnaces, ceilings with her fingers.

We learn little about the old believers themselves, but they are not gloomy ascetics or monks without a monastery. If the group wishes, we can linger and see their lives with our own eyes.

The second hall of the Museum is dedicated to the Altai population. It presents household items and the results of some archaeological excavations conducted in the area of the uymon steppe. Have you ever seen a large strong vessel made of horse skin? And galtra? This is a baby rattle with smooth bones, beads, small leather bags in which pieces of the umbilical cord of newborn babies were sewn. It was not just a toy, but a talisman against evil spirits.

There are also several reproductions of paintings by the famous Altai artist G. I. Choros-Gurkin.

The third hall is fully dedicated to the expedition to the Altai of the Roerich family on August 7-19, 1926. the Museum presents the original sketch of the thesis ” Bulletin. On the river ” (1890), for which in 1897 N. K. Roerich received the title of artist. In the vicinity of Uymon, in the Akkem valley and among the boulders of the Akkem glacier, you can see a relief or painted Roerich” coat of arms ” – a sign: three small red circles symbolizing the past, present and future, they are inscribed in one large – “eternity”. Mount Belukha is perceived by pilgrims as a kind of analogue of jomolungma (Mother of the World), and to this day the followers of Roerich go to the Altai to refuel with “cosmic energy”. After all, it is implied that the Beluga is a kind of antenna-receiver of this energy.

And there is no doubt that having passed the Golden paths of Altai, we will become the original receivers of this wild land. 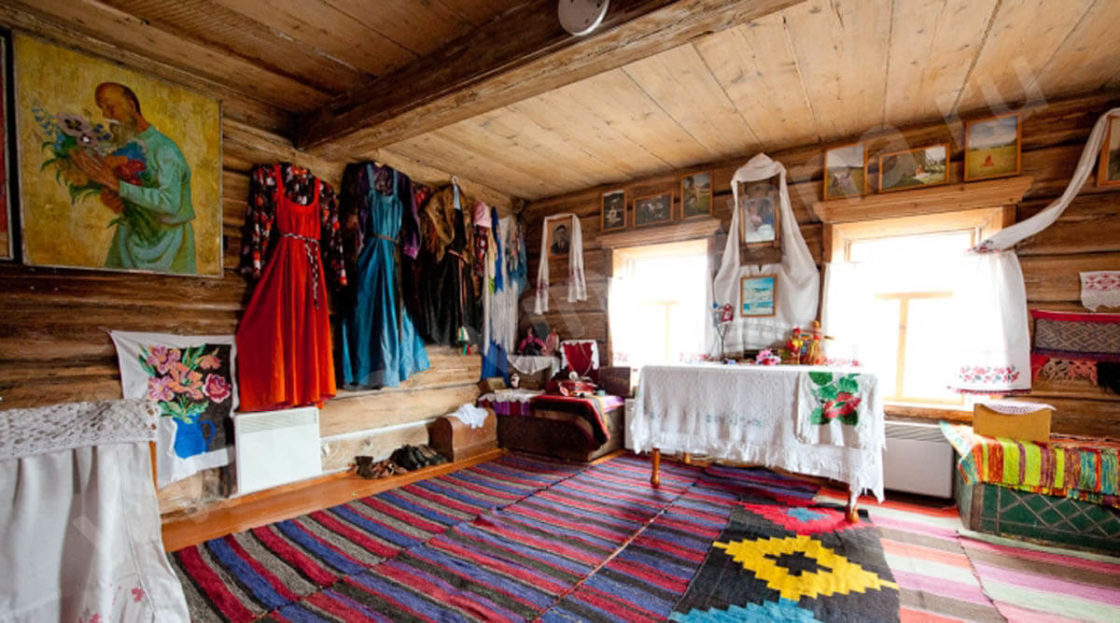 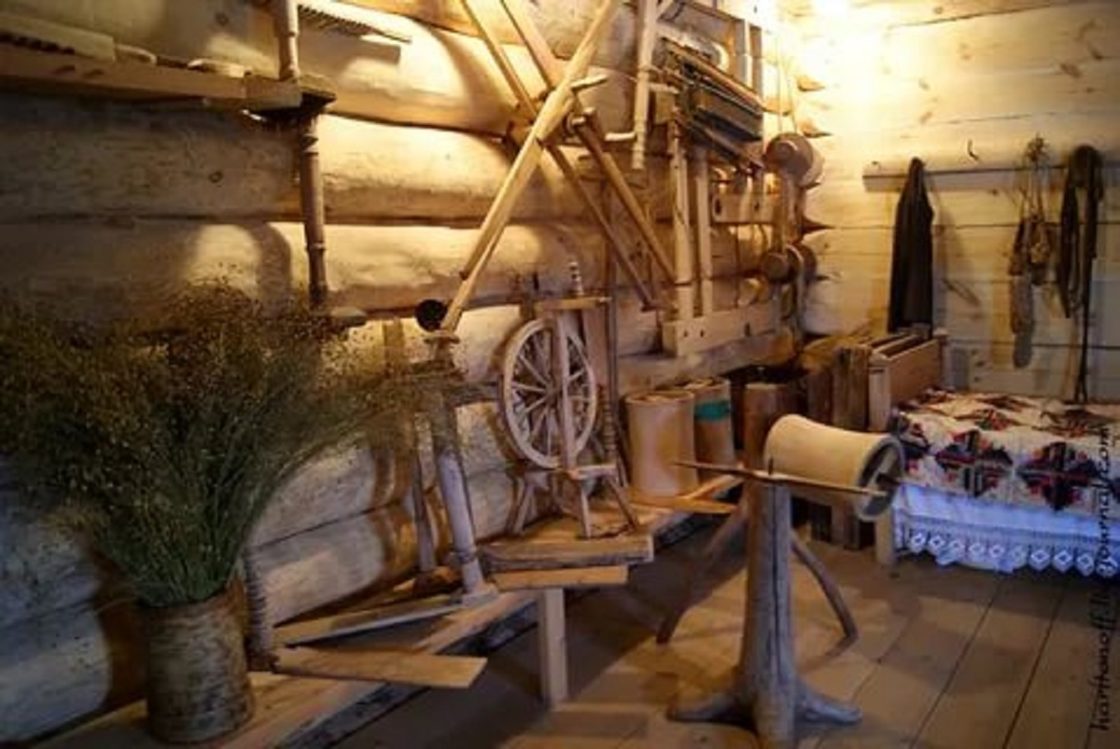 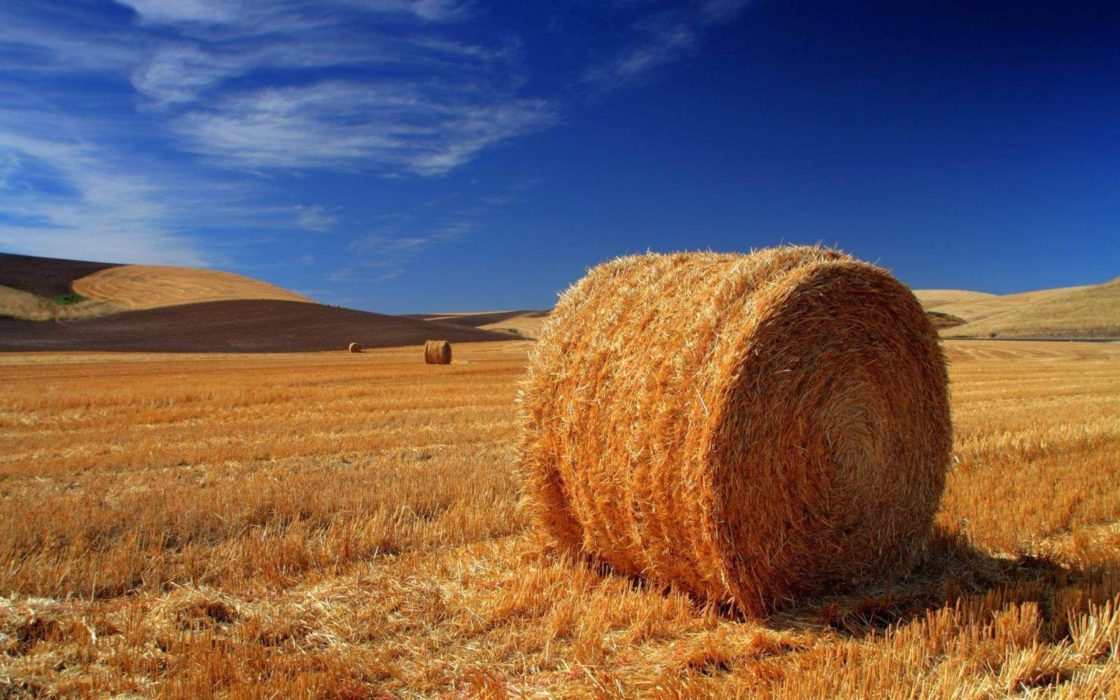 What is included in cost:

What is not included in the cost: