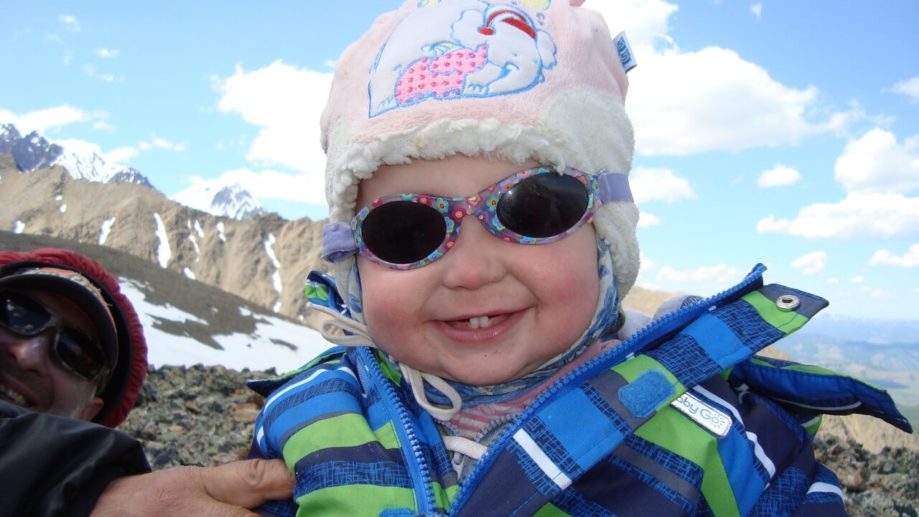 Nine-month-old Varyuscha, or, as her father affectionately calls her, “Varenets”, and her mother—”Kozyavoschka”, accompanied her parents to 3100. We’ll talk about this baby…

Her voice and the songs she used to lull herself to sleep when she clearly wanted to, but somehow couldn’t, could be heard all along the trail. Throat singing was mixed with a kind of Russian “ear”. Skyraider came to us with the words, “I don’t believe my own eyes” and “you’re still on top? Well,… good luck to you.”These and other phrases were inspiring! At that time, there would have been nothing that would have made you hang your nose, especially since Varyushka often smiled at us.

Sitting down at one of the halts, our dad was amazed: “here we are… The daughter was to be announced as the youngest participant in the skyrunner race.”

Later, we admitted to ourselves that this is not what we are here for. The main proof was a wide smile from the two lower teeth during the entire stay on the rocky teacher.”

When I left home, I thought that not taking my daughter with me was a crime, given that the average Russian citizen sees the sea once a year, and the mountains once in a lifetime or never.

We often joked that Varya was unlucky with her parents))) dragged to the mountains. but if you think about it, family is not only the right family food or training, but also joint travel, the best that we can give to a child.

– First mountain bike. How did it go, what difficulties were waiting for?

– The main thing is not to invent them. Especially my mother. Everything is the same as in the city. Our main difficulty was getting to sleep if you don’t carry ergo or if it’s not a bottle for the night. Don’t worry, the food, the air and a slight fatigue in the aggregate will do the trick.

I am happy when a child most of the time smiles at everyone and everything, laughs and tries to babble, offering his precious pacifier to everyone he trusts, which we could see at the bard festival. And by the way, the drums of Aktruban, Grigory Danskoy are forever!

– How useful are joint trips of children and parents?

— During even a week’s journey, you can gain experience of several years of life, expand the boundaries of your four walls and trample on stereotypes, exceed all your expectations and, by the way, even the expectations of your child.

Open the world to your child, breathe it in, and pass this secret skill to your children! This is the best kindergarten, school, extracurricular communication, the most striking examples of interaction and the best examples of getting out of the narrow reality of the city.

– Does Chad have any prospects for the future? For example, “make” a guide from Chad?

– The child is not obliged to follow in the footsteps of parents, to perform what they managed or failed to fully. And our main goal is to let the flower open. I hope we can do it!

After the first swing in ergo to the height of 2500 of the Maly Aktru glacier, in the evening, a guy from Sberbank asked: “are you preparing Varya for professional work as a guide?”. One of the colleagues answered with a question: “do you take your child to the office to teach programming?”.

It’s very simple-either you choose “life as an experiment”, or write it again “on the draft”.

from the Aktru gorge (Mountain Altai).